Legend has it that the Prophet Muhammad was travelling out of Mecca when he glanced down the mountains to Damascus, and refused to go there because he only wanted to enter Paradise once after his death. Damascus is the oldest continuously inhabited city in the world and is the capital of Syria.

To the position as the first stop for travelers from the east and with the Barada River, which flows year-round in the western mountains of the Anti-Lebanon, Damascus has always been a much sought after city. The history of those who conquered this place or wanted to conquer it, is fascinating, as is the architecture and culture they left behind.

From 656-750 CE Damascus was the capital of the Umayyaden Dynasty. With the victory of the Abbasids the seat of the Caliphate was moved to Baghdad and the importance of the former capital faded. Not until 1104 was Damascus again the home of the Seljuk dynasty.

In consequence, the city gained renewed importance, especially in the struggle against the Crusades. During the Second Crusade, Damascus was unsuccessfully besieged by crusaders for an entire week.

After the collapse of the Mamluk rule, which had reigned over Damaskus since 1250 , which had successfully defended itself from the Mongols, amongst others, Syria and Damascus in fell to the Ottomans in 1516 CE.  Under Ottoman rule Damascus, which was used as a starting point for pilgrimages to Mecca, expanded and experienced economic favour. There is hardly any other city that combines so much history and religious and cultural pluralism in such a small place.

Aleppo is the largest city in Syria and one of the oldest cities in the region. While Damascus was the „holy“ city and seat of all rulers, Aleppo has been the commercial center of Syria since the Roman Empire. 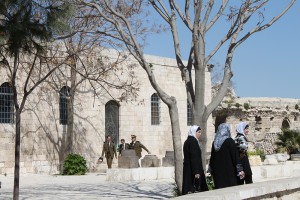 After World War II, the city was to a large extent re-designed. For example, many large, modern roads have been built to allow modern traffic management in the city.

In the 1970s, in favor of modern apartment blocks, large parts of the Old Town were demolished and deteriorated more and more.

In 1986 the old city of Aleppo, however, was declared a UNESCO World Heritage Site. Since 1993 in collaboration with the German Technical Cooperation and support from the Aga Khan Trust for Culture and the Arab Fund for Social and Economic Development, the site has been renovated. In 2004 the project received a Harvard School of Design Urban Design Prize.

With a history that stretches back to the first millennium, Homs, or Ancient Emesa, is not simply the third largest Syrian city. The name Emesa is of Semitic origin. The geographer Strabo mentioned an „Ethnos“ (people or tribe). One settlement from the citadel hill in Homs can be traced back to 3000 BCE. Homs / Emesa is also the birthplace of one of the dynasties of the Roman Empire, and under the Byzantines was important hub of Christianity. Homs fell along with Syria in the 16th century to Ottoman rule. In the Middle Ages, the city was known for its weaving and silk production, and later remained a center of textile production.

Lattakia is the only major Syrian port on the Mediterranean. The port was already an important trade location during the Roman Empire. Lattakia is one of the richest cities in the country, thanks in part to a high number of families with relatives living abroad, but mainly because of a channeling of funds by Hafez al-Assad himself, who is from Lattakia.

With the Orontes River which meanders through the city center, Hamas, with its many gardens and wooden water wheels, was treated as a tourist mecca. Like Damascus and Aleppo, the city is considered one of the oldest continuously inhabited cities in the region.

Hama is thus an important Syrian city, not only because of its natural, but also its historical diversity. More recently Hama has become a political stage, although it has been difficult to verify evidence of the 1982 massacre. The Syrian army, under Defense Minister Mustafa Tlas is believed to have bombed the city, as members of the Muslim Brotherhood in Hama called for the overthrow of the government. Through an almost total isolation of Hamas from the public was enforced for a considerable time, the number of deaths is unknown or varies by several orders of magnitude depending on the source and interest group.